More than 100 bystanders show up for Jackie Kennedy emulation 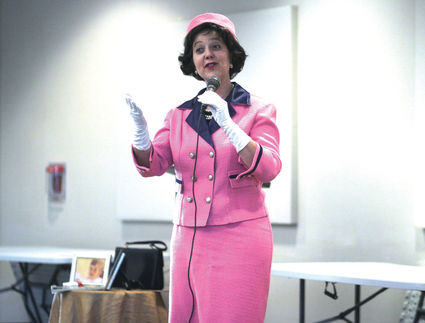 Whether it's Queen Elizabeth II, Amelia Earhart, Eleanor Roosevelt, Jackie Kennedy or anyone else, Leslie Goddard seems to be able to portray anyone.

This time, it was Jackie Kennedy.

At the Joliet Library in front of more than 100 spectators, Goddard portrayed former first lady and fashion icon.

"She is the most fascinating person I portray and people are just fascinated by her," Goddard said. "I've been doing this program for 10 years, and every I think if everyone's already seen it or maybe people are getting tired of, there's just more and more interest."

Kennedy, the First Lady of the United States when her husband John F. Kennedy was in office, was an enigma.

Although she was regarded as an international icon of style and culture, Kennedy was somewhat aloof.

Kennedy's fashion choices became a hot topic in the media throughout her time as the First lady, especially when she hired American designer Oleg Cassini.

"She did a lot to craft for how we remember her," Goddard said. "Whether it was her glamor, youth, emphasis on the arts, historic preservation, that was all Jackie."

She was the first presidential wife to hire a press secretary, Pamela Turnure, and carefully managed her contact with the media, usually shying away from making public statements, and strictly controlling the extent to which her children were photographed.

Though she was not very fond of the media, the media portrayed Kennedy as the ideal woman.

That assertion led Kennedy to more uncharacteristic activities in the White House such as hosting social events that brought together elite figures from politics and the arts.

"For a wife and a mother, I feel like she doesn't always get the credit she deserves," Goddard said. "

Being a widow from the assassination of her husband John, Jackie also had a death that is still looked at today as a mystery.

In November 1993, Jackie was thrown from her horse while participating in a fox hunt in Middleburg, Virginia, and was taken to the hospital to be examined.

A swollen lymph node was discovered in her groin, which was initially diagnosed by the doctor to be caused by an infection.

Because of the fall from her horse, over the next six months Jackie's health began to deteriorate even more, and then died May 19, 1994 from Non-Hodgkin lymphoma.

Although Kennedy once described feeding her dogs reporters for food and not always being as forthcoming as people would have liked, Goddard said she was still a revolutionary First Lady that had a large positive impact on so many people in America, most notably her family.

"She always loved being a wife and mother," Goddard said. "She was so different from any other First Lady before her with the arts, fashion and everything else she stood for, but she was a great person and even more so a great First Lady."