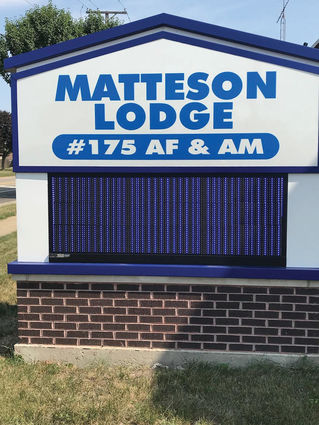 Just a mention of the fraternity that has roots back as far as the 14th Century or its iconic letter G surrounded by the compass and square brings different thought to the minds of different people.

Who exactly are the Freemasons? What do they do? What lies behind the walls of Matteson Lodge No. 175 at 350 N. Midland Ave. in Joliet?

Worshipful Master Ed Kerfin wants the community to have a look for themselves.

The Matteson Lodge is holding a community day and open house from 10 a.m.-2 p.m. Saturday, Sept. 14 – the first one of its kind in recent memory.

"Most people don't know anything about the Freemasons," Kerfin said. "I have heard that it's a cult or a religious organization – well, you can't talk religion or politics here or you are asked to leave. We open or close with a prayer, but I don't care what religion you are, if you are a good man and you pass the background checks – you are in. Once you are in here, everyone is the same."

While, like any organization, some practices are kept between the members, but the Masons are not performing mysterious rituals or planning covert governmental takeovers in Joliet.

"Don't believe everything you read on the internet," Kerfin said. "There are no real secrets."

Freemasonry is the leading fraternal organization in the world, which was formally organized in London in 1717 and has more than 3 million members worldwide, 1.1 million in North America, including one-third of United State Presidents.

"Being a Mason is about selflessness and helping others and making good men better men," Kerfin said. "We do a lot of charitable events here between the food drive and the youth organizations we support. If you are a Mason, you can also join the Shriners and we all know the Shriners and the children's hospitals and free medical care. The Scottish Rite helps those with dyslexia to read. That is us giving back."

Many of the traditions of the Freemasons are the same as when the organization was founded – including the fact that only men can be members.

Kerfin stressed, however, families are involved in most of what the Masons do.

"It is a men's fraternity and we don't have the wives in the meetings, but we have them in everything else that we do," Kerfin said. "We try and get the families involved in a lot."