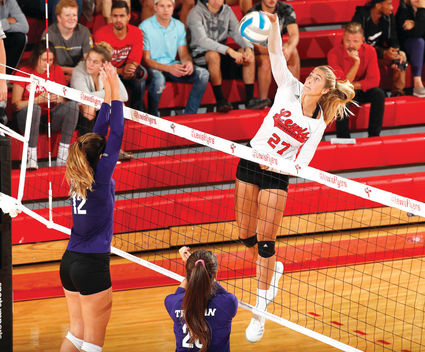 Ava Venema and Lewis volleyball are picked to finish atop the GLVC.

The Great Lakes Valley Conference announced on Aug. 20 that the No. 7 Lewis University women's volleyball team was picked to win the GLVC Title in the annual GLVC Preseason Coaches Poll. Coaches were not allowed to vote for their own team.

The GLVC regular season with feature a 15-match, single round-robin schedule this fall with eight pairs of travel partners. The regular season champion, along with the next seven best teams based on Conference winning percentage, will earn a berth to the eight-team GLVC Volleyball Championship Tournament on Nov. 21-23 at the EastSide Centre in East Peoria, Ill.

"The GLVC has proven to be one of the toughest conferences in country every year," Lewis head women's volleyball coach Lorelee Smith said. "For us to be picked as one of the top teams, is not only an honor – but a tremendous challenge."

Lewis was also picked seventh in the American Volleyball Coaches Association (AVCA) Preseason Coaches poll which was also announced on Tuesday. The Flyers were joined in the AVCA poll by Rockhurst at No. 14, Drury at No. 18 and Illinois Springfield was receiving votes.

The Flyers open the 2019 season on Friday, Sept. 6, as they take on Millersville at 10:30 a.m. at the Nova Southeastern Shark Invitational in Fort Lauderdale, Fla.