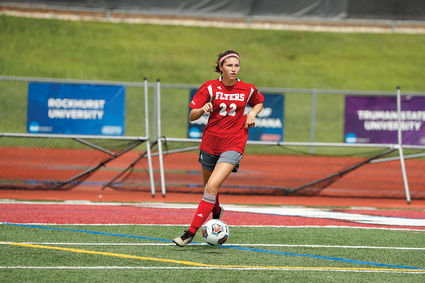 Plainfield’s Abby Gustafson and the Lewis soccer team are predicted eighth in the GLVC.

Kailey Parnello (Rockford, Ill./Boylan Central Catholic) was Lewis’ leading scorer a season ago with eight goals and two assists for a total of 18 points.

Lewis will open the 2019 season at Ashland Sept. 6 at 6 p.m. in Ashland, Ohio before traveling to Tiffin, Ohio for a Sunday match against Tiffin.

The first home match for the Flyers will be on Wednesday (Sept. 11) when they take on Purdue Northwest at 6 p.m.

The Flyers will take on Northern Michigan in a preseason scrimmage this Saturday (Aug. 24) at 1 p.m. in Marquette, Mich.

Lewis received 106 points and were sandwiched between Quincy (108) and Missouri-St. Louis (96). Bellarmine grabbed nine of the 16 first place votes and 210 overall to be the coaches choice to win the league after a second place finish last season. Maryville nabbed two first place votes and 195 points to place second while defending GLVC champion, Southern Indiana had five first-place votes but finished fourth behind Indianapolis in the poll.

Lewis will open at home against Purdue Northwest on Thursday, Sept. 5 at 7:30 p.m. at Lewis Stadium.