Casseday Mansion in jeopardy of being demolished

Historian Mary Beth Gannon among others, to sign petition and keep fighting to keep the mansion standing 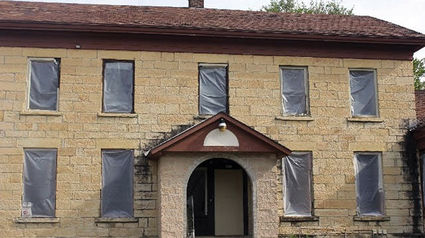 While it is said that all good things that must come to an end, one group is trying to prevent the end of one nostalgic building on Joliet's East Side.

One of the last mid-19th century two-story limestone homes, the George Washington Casseday Mansion is in jeopardy of being torn down.

Historian Mary Beth Gannon does not want to see the venerable peace of history be demolished.

"That house has such a unique history to it and I really don't want to see it go away," Gannon said.

When Casseday moved to Joliet, he got into some legal trouble and was sued by Abraham Lincoln.

"There's definitely some connection there." Gannon said. "During the lawsuit Mr. Casseday, he came to Joliet and he was a very prominent business man that sold land out of his house, there's even a Casseday subdivision."

The limestone house that was built in 1851 on the city's east side, may be torn down so developers can build a new Thornton's gas station at the corner of Collins and Jackson Street.

The 1851 limestone home, now a three-unit apartment is something that initially Gannon said didn't make a lot of sense because of a current gas station that is already near the house.

"When I heard about a year ago now that a gas station wanted the place I was naturally upset because there's already a gas station across the street from the house," Gannon said. "But then, our hopes got up because the representatives from the gas station said they would help move it."

On the east side, where Gannon acknowledges there needs to be more businesses, she though that it would be a win-win for the city with money coming in, and the redirecting of the house. "Until recently, I found out the house is just going to be demolished," Gannon said. "I didn't know, I was so upset because they said they would be fine with moving it."

One man showed interest in moving the house and refurbishing it, but that fell through.

"A bunch of people have been rallying together," Gannon said. "There are a lot of people who want this wonderful house saved."

With the state of the house still up in the air, Gannon said people who still want the house saved can sign a petition to keep it standing.

To sign your name on the petition, you can go to https://www.change.org/p/city-council-of-joliet-save-the-historic-casseday-mansion