Bolingbrook's Borland looks to lead No. 5 ranked Ohio State to a National Championship 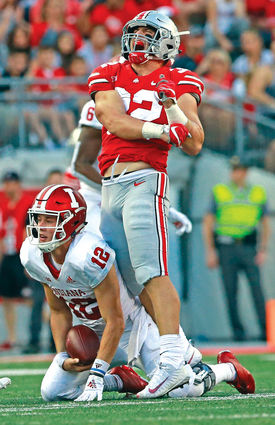 Heading into his junior season at Ohio State University, Bolingbrook graduate Tuf Borland is excited for the changes on the horizon.

Ryan Day takes over for Urban Meyer as head coach of the Buckeyes and that means a new look on both sides of the football.

"Sometimes change is a good thing. You are going to see a lot of guys that are excited to be out there and excited to be playing again and I think our performance will show," Borland said. "There is a lot of expectation here and we are expected to live up to that. We talk about next man up and always being prepared and we have a team full of guys who can do that.

"Anytime there is a new coaching staff, there are changes and that will be evident. I don't want to get into specifics or scheme, but it is going to allow each of us players to use our athleticism and play football like we know how."

After redshirting his freshman season, Borland has played in all 28 games the past two seasons, despite suffering an Achilles tendon injury during spring practice. Last season he started 11 games and finished third on the team with 67 tackles, including nine tackles for loss. His performance earned him honorable mention All-Big Ten.

Borland has been a two-time captain for the Buckeyes and is one of only two returning captains from last season. If selected by his teammates again, the middle linebacker would be only the second-ever three-time Ohio State captain and first from the defensive side of the ball, joining only former quarterback J.T. Barrett.

At the end of this season, Borland has a decision to make – with one year of eligibility remaining and with graduate classes already under his belt can stay at Ohio State and continue his graduate degree and play football, he can leave college and head into his chosen profession or try his hand at playing professional football.

While he has options at season's end, Borland said he will focus on that after he helps the Buckeyes compete for a Big Ten and NCAA National Championship. Ohio State is ranked No. 5 in the nation in the preseason USA Today Coaches Poll and Associated Press ranikings.

"Coming in early gave me some advantages academically and I will graduate this fall while taking graduate level courses. I haven't really given any thought to my future," Borland said. "I would like to play, but right now I am just focused on this season. When I came here I was looking to provide myself with the best options for my future, whether I am lucky enough to keep playing or get ready for work and life after football.

"The biggest thing for me this year is putting everything I have into these guys and this team and if we have everyone buy in, there are no limits to what this team can do. I just want to do whatever I can to help this team win and we will see what happens."

The possibility that this is his last at Ohio State will have Borland taking time to enjoy the special moments this season.

"That first year on campus seems like it goes by pretty slow and then now you look back I can't believe I have been here going into my fourth season," he said. "It goes by pretty fast. You have to soak it all in."

• Look next week for a complete list of allDivision-I FBS football players from the Voyager Media area.