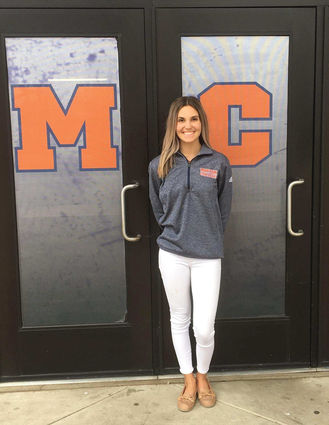 After completing her internship at Argo High School at the end of last school year, Kristen Shimko was looking for a job.

She went into Morton College in Cicero looking for a position as an academic advisor and ended up landing that position as well as head women's basketball coach.

In her first head coaching position, Shimko takes over a Panthers' program that went 16-15 last season.

"I am really, really blessed by the opportunity," she said. "I interviewed for the Academic Advisor position first and after my interview, I was talking with the president and they had just let the head coach go and he asked if I wanted to meet the athletic director.

"It wasn't planned by any means."

The 25-year-old Plainfield North graduate was an assistant on the 22-4 Argo girls team while completing her internship.

Just because she has never held a formal head coaching position does not mean Shimko is new to the ranks.

She competed for four years at Concordia University Chicago, was an all-Southwest Prairie Conference selection at Plainfield North High School in 2012 and has been around the game since birth.

Shimko's father, George, runs the George Shimko Basketball School, which he opened in 1994.

Kristen coached in his program for a decade.

"Looking up to my dad as a mentor has been my biggest motivation to stay in the game and work with kids and young adults," she said. "I see how much he has influenced them and how they look up to him and I always wanted to carry that on as a coach and a person."

Having the last name Shimko as well as having a reputation as a talented, hard-working player has helped her land recruits to open her inaugural season.

"It helps communicating with the coaches because they either remember me as a player or they know my dad and being able to have a conversation and they know they can trust me with their players," she said. "I am a gym rat. I love being in the gym and being able to watch the game. Now, I can watch the game and then talk with the coaches and the girls, it is amazing. It is something I didn't even realize it was something I wanted until I had this position.

"I was nervous at first because I am young. I was thinking that if I were a mom meeting someone younger than me that wants to coach my kid, how would I react? But the response that I have had from the parents and other coaches has been amazing."

When she is recruiting, she said, Shimko will not always look to the tallest, fastest or best shooter. Heart, attitude and character will also play a role in the players she looks for.

She has witnessed firsthand how desire can fuel a career.

"My sister (Kara) is a perfect example. She was passed over by colleges because she is 5-foot-2 and she is having a phenomenal career (at Cardinal Stritch)," Shimko said. "It is the size of your heart and how much work you are going to put in on and off the floor."

Basketball is not all that drives Shimko.

Armed with a bachelor's degree in psychology from Concordia and a master's degree in school counseling from Saint Xavier University.

Her role as an academic advisor will make sure the program truly features student-athletes.

"The girls on the team will have the opportunity to see me on campus. As an academic advisor role, I can stress even more the idea of the student athlete,

"This will be a huge challenge for me and I excited to see what comes out of it - not just for myself, but for the girls and getting them ready for what they want to do with the rest of their lives. This is so much more than just a game. I feel like they respect me and my assistant coaches because we have all been collegiate athletes and we all know the deal."