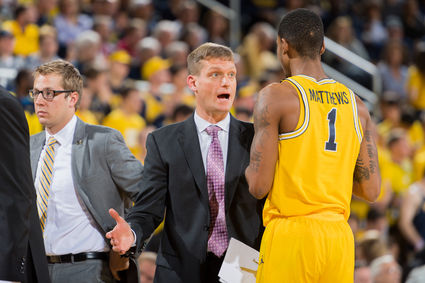 Former Joliet West head coach Luke Yaklich is on staff at the University of Michigan.

When the University of Michigan made its run to the NCAA Men's Basketball National Championship game, it did so with help from a former local coach.

"Luke was destined to be a college coach," said Joliet West Athletics Director Steve Millsaps. "When I sat and talked with him when he told me he was offered (a job at Illinois State University), he was struggling with the decision, you just knew he would be putting in the work – and look at him now."

Yaklich made the jump from high school to the college ranks in 2013, getting hired at his alma mater Illinois State as an assistant under current head coach and college roommate Dan Muller.

Before the start of the 2016-17 season, Yaklich was promoted to associate head coach and helped the Redbirds to a share of the Missouri Valley regular-season title as ISU set program records for overall victories (28), regular-season wins (25) and conference wins (17).

In four years at ISU, Yaklich helped Illinois State to an 86-50 record and two berths in the National Invitation Tournament and one College Basketball Invitational.

In addition to his coaching duties with the Redbirds, Yaklich was in charge of ISU men's basketball academics along with assisting in recruiting, scouting and working on skill development. In the fall of 2014, ISU established a team grade-point average record with a 2.99 GPA, breaking the previous mark by 0.13 points.

"At the end of last season, coach Muller and I sat down and he asked where I would like to be in three years and in five years and I talked about the possibility of being a D-II head coach or a D-III coach and keep learning and we discussed the possibility of being a high major assistant coach and once that process started – I will never forget that conversation – we were in the office and (coach Muller) said he heard Michigan had some openings and would I like him to call coach Beilein. At the time, coach B said he was not looking to hire anyone he really didn't know. I respected that, although I was hoping to get an interview and get some experience. "About a week later, he called back and said a couple things didn't work and he wanted to talk to me. I talked to coach B that night for about an hour and we talked about family and coaching, philosophy and teaching and it was a great conversation and I quickly realized he was someone that what everybody writes about him is real and someone I would like to work for."

Yaklich said he and Beilein met in Atlanta and we met for about an hour at the Delta Club at the airport and continued to talk after that set up a meeting again two weeks after that in Las Vegas.

"We met at the South Point Hotel in a deli and oyster bar and about an hour into the conversation, he slapped his hand on the table and said he was going to recommend me for the job," Yaklich said. "My jaw hit the table as well as the tears. I was really happy to have this opportunity and I was very fortunate to have this opportunity and very thankful coach B took a chance on me.

"What coach was looking for is someone who is a teacher and a learner and someone who is genuine, which is kind of who I will always be as a person and a coach. We had a connection there because he was a high school teacher and he is a family guy and is humble and wants to keep learning and growing."

Before ISU, Yaklich was the head boys' basketball coach in Joliet – coaching the combined Township program for three seasons and three at Joliet West. He also coached in the AAU ranks with the Joliet Pride and Illinois Wolves.

In his six years in the Joliet high school ranks, Yaklich posted a 104-62 record.