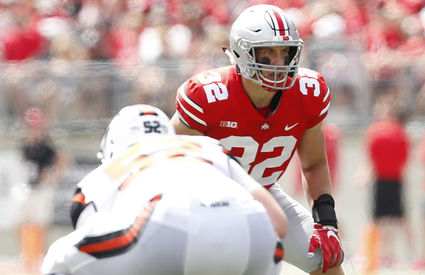 He joins the team coached by another local product in Lockport Township High School graduate Mike Zimmer - one of the few defensive minded head coaches in the NFL.

"I just learned about that connection earlier in the process before the draft," Borland said of Zimmer's ties to the area. "It is cool. It's a small world. I think this is a great fit.

"It is an unbelievable opportunity, but at the end of the day, I need to go in and show what I can do and work extremely hard and earn the respect of my teammates and coaches. If it is on special teams, playing linebacker, maybe even fullback. I don't know. Whatever the team needs me to do, I am happy to do. I just want to contribute to the organization however I can."

Borland had talked to almost every NFL team prior to the draft, mainly at the senior bowl, and he had a good feeling about Minnesota.

"The Vikings were a team that I could tell did some homework before the senior bowl. They knew about me," Borland said. "I spoke with coach (Adam) Zimmer, the linebacker coach, at the end of February or early March and I thought the call went well. I really enjoyed the time with him. I thought it would be a good fit throughout that process and it worked out that way. I am thrilled to be a Viking."

At Ohio State, Borland started 31 of his 49 games, was a four-year starter and one of only two three-time captains in school history with former quarterback J.T. Barrett.

Borland was the middle linebacker on back-to-back playoff defenses, including a 2019 unit that led the nation in total defense. Borland was named the Defensive MVP of Ohio State's playoff semifinal victory over Clemson this past year.

He was part of a linebacker group that sent four to the NFL this season, as Pete Werner was a second-round selection of the Saints, Baron Browning was a third-round draft pick of the Broncos and like Borland, Justin Hilliard signed as an UDFA with the 49ers.

Heading into the draft, the knocks on Borland were his height at 6-foot, and his speed.

He heard it, but said it only fuels the fire to prove he can play.

"They can say whatever they want about me. I am this tall and I am not as fast as I should be, but I am confident when they put on the tape, they see a good football player," Borland said. "I am confident in that, and I think the Vikings are, too.

"That is kind of the way the journey has worked out for me. I was never the most highly recruited guy or highly sought after guy, but when I get into some of these organizations, people really respect the way I go about my business. I am still going to approach things from a football standpoint the way I always have. I know there are going to be doubts if I can play at this level, but I embrace that. I almost enjoy those doubts and proving people wrong."

Borland has made studying and football his career since he has been at Bolingbrook.

At Ohio State, he graduated with his degree in human development and family science and earned his master's degree sports coaching.

He was a four-time member of the academic all-Big Ten Conference team.

"My parents told me in high school that I didn't have to have a job. My job was to do my best in school and play football, so I worked my hardest in those two areas," Borland said. "I am leaving Ohio State with two degrees and I feel like I had a great career and now it is time to move on. Whatever is there, whatever inches (are to be gained), I will find that through film study and knowing the playbook. I am going to pour everything I have into that aspect and carve out a role."

As time has passed on Borland's final game, a 52-24 loss to Alabama in the National Championship game, he said he has had time to reflect on his career a bit more.

"The turnaround after the National Championship was so short. The next day, I was down in Florida at my training facility, so there wasn't much time," Borland said. "But, over the last few weeks, I have had some conversations with my parents and looking back on it. I am so thankful I chose Ohio State and had the opportunity to be around such a historic program, great coaches, great support staff and great teammates.

"We had a lot of success. We won four Big Ten Championships, I was part of three college football playoff teams and had the opportunity to play in the National Championship. It was a wonderful experience and it is something I will forever be grateful for."

One of Borland's teammates the last couple seasons - and a big reason the Buckeyes were in the championship game - was quarterback Justin Fields, who is drawing a lot of buzz in Chicago after the Bears traded up in the draft to select him No. 11 overall.

"Everyone sees Justin and what he does on the field - the incredible arm talent and speed. He has everything there. What people didn't see is the way he approaches his business in the weight room and in the film room and how hard he works there," Borland said if his former teammate. "I think the most impressive thing about him to me is when he transferred in (from Georgia), we all knew how talented he was, but he just put his head down and went to work. I have no doubt he will be an unbelievable player for the Bears. 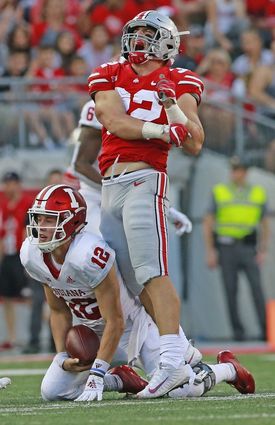 Former Bolingbrook and Ohio State University linebacker Tuf Borland has signed with the Minnesota Vikings of the NFL.

"At Ohio State, the pressure you get from a fan base is probably a lot like what you get in Chicago, so my initial thought is that he is 100 percent the right guy for the job."

If Borland finds his role with the Vikings, he would face Fields and the Bears twice a season as division rivals.

Borland is happy to be playing in the NFC North, where conference games are no more than a seven-hour drive from Bolingbrook, allowing family and friends to follow his career.

"My parents have been with me every step of the way," Borland said. "They have come to every game since I was about five-years old, so I am extremely happy to have the opportunity to play in front of them."