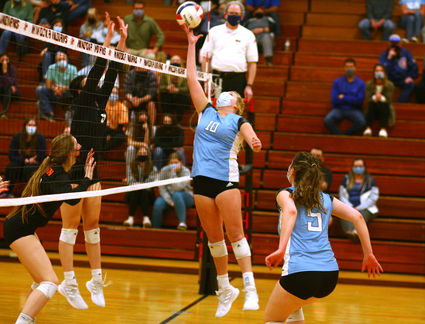 Two schools, separated by a 20-minute ride down Interstate-80, both programs that have had much success on the local volleyball landscape over the recent times, yet during normal seasons don't play each other.

This year is not normal and Friday night, Minooka and Joliet Catholic Academy faced off in Minooka on the Indians' senior night.

"We just couldn't stop Alexis and (Crystal Galaviz)," said Minooka coach Carrie Prosek. "When they were in the back row was when we would get our runs, but then they would come back to the front. Alexis was on fire today.

"It is always a good game. It was nice. All the girls know each other and they all play together. At the very beginning, I felt normal except for this mask. This is a game that has to continue because it is competitive and fun."

The Angels went wire to wire in the first set, but in the second set, Minooka jumped out to a fast start, before JCA clawed its way back and took the match – something coach Christine Scheibe said is something the team has not done much this season.

"I am super proud of the fact that even though we got down in game two, we showed some fight tonight and that is something we have been lacking all season," she said. "Hopefully this is a turning point as far as playing with confidence and knowing that even if we get down, we can still come back and make a run for it.

"We have a different lineup every game it seems. I was without my No. 1 outside and No. 1 middle tonight and the key is that, even without them, we started out strong."

One of those players missing was Georgia Southern recruit Jillian Gray.

Bonde, one of three seniors along with Jessica DeCraene and Collette Seidel, leaving the Indians this season has been a cornerstone for Minooka the last three seasons.

"All of them have been a big part of the program – Heidi was with us at state freshman year as a manager and then her sophomore year she was our leading outside hitter and she has been for three years," Prosek said.

While both teams have quality seniors, they also have a slew of underclassmen that are getting quality experience during the pandemic-shortened season.

"This is great experience because I have a lot of juniors on the floor and this will be a quick turnaround from the end of this season and the beginning of next and hopefully the lessons they are learning will carry over and they won't have as far to come once next season starts," Scheibe said.

"Having 10 juniors is a good thing for next year," said Prosek. "Our JV team is really good and we have good program coming up, and we usually do. They love the sport."

With no state tournament this season, both teams will look to the conference tournament as a season finale.

For the Angels, the East Suburban Catholic Conference is like a state tournament in itself.

"Last year there were four schools from our conference at the state tournament and we have talked about that with the girls and they know our conference is strong and there is a good chance that whoever comes out of our conference could have won a state championship," Scheibe said. "It is something to look forward to, but right now, they are playing for each other. This group of girls likes each other and they don't want to let each other down and there is playing for the pride of your school and being out there on the floor with your classmates and friends and playing hard." 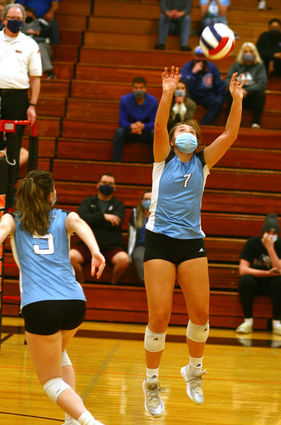