Lewis welcomes new MD-80 plane to its fleet for students

A few weeks ago, on Jan. 23, Lewis University officially welcomed a retired American Airlines MD-80 to its fleet.

A brief celebration was held with American Airlines representatives and community members at Lewis University, who has been a leader in aviation education since 1932.

"We had a very generous donation of a 737 from United Airlines back in the [1990s]," said Department Chair of Aviation and Transportation Ryan Phillips. "The aircraft was at the end of its service career for United when it was donated to Lewis and now its 20 plus years later and its just been hard to keep operational for our students."

The MD-80 donation helps Lewis University Aviation and Transportation develop a new generation of training as it provides an updated avionics package and broadens opportunities for students to earn more Federal Aviation Administration (FAA) certificates for those that desire to go into the field.

Currently, all 700 plus Aviation and Transportation students will use the MD-80 at some point in their studies, however, it will primarily be used by almost 200 students in the Aviation Maintenance Management program to further develop their skills and knowledge.

"The MD-80 aircraft is younger and a lot more operational and it just came down to the timing of the whole thing," Phillips said. "The 737 was reaching a point with its age that we couldn't update and maintain its operational significant cost."

This donation from American Airlines is parked behind the Aviation and Maintenance Facility, where Phillips said the primary use is for students, but there might Lewis University takes some requests occasionally for spectators to come view it.

For Lewis students, the main use will be for the flight students to have exposure with system operations that will include starting the aircraft, which is a part of the maintenance training.

Currently at Lewis, there are two airliners and two business jets that students train on for maintenance that help them with hands on experience for their field of work.

Phillips also added that this MD-80 is very special in the field because on December 20, 2019 where the delivery of the aircraft took place, it was the last flight of an American Airlines MD-80 in the United States.

American donated the last MD-80 aircraft after retiring the last of its McDonnell Douglas MD-80 fleet to Roswell, New Mexico, in early September 2019.

"Everyone at Lewis is all very excited for the new MD-80 that our bright students will have the chance to work on," Phillips said. "This doesn't happen very often, we're very grateful for American Airlines and the generous donation that they gave us." 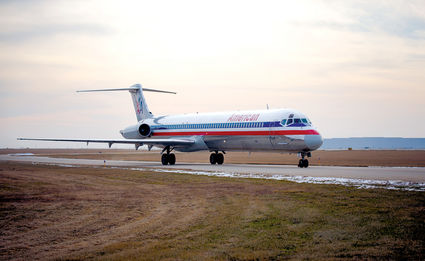