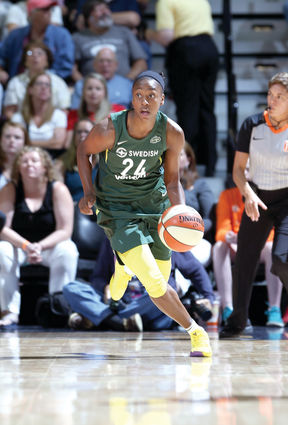 Coming into this season, former Niles West superstar Jewell Loyd had a full list of accolades already in her career.

She tallied more than 3,000 points for the Wolves, as a senior at Notre Dame, she was the ACC Player of the Year as well as ESPN women's college basketball player of the Year, she left the Irish after only three seasons, yet still walked away with 1,909 points in her college career, Notre Dame's fifth-highest total ever.

After departing the Fighting Irish, Loyd was the No. 1 overall selection of the 2015 WNBA draft by the Seattle Storm and was the Rookie of the Year that season and in 2016 was second team All-WNBA.

That wasn't enough for the 24-year-old.

So, this season, Loyd added WNBA All-Star to her resume.

"That is something that was one of my goals – to be an All-Star," Loyd said. "I am happy it worked out and I have to give credit to my teammates and coaches for putting me in a position to knock down shots and play hard for them."

The game, which used a draft system with captains Elena Delle Donnne and Naperville Central graduate Candace Parker selecting from the nominated players.

This season, she is averaging 16 points per game for the Storm, who entered the All-Star break with a 19-7 record, the best in the league.

"My teammates have been phenomenal. We are on a good ride – everyone is playing together, everyone is focused and it is just a good time right now," Loyd said. "I have been in a little bit of a funk shooting wise, but I have never let that stop me from playing hard on the defensive end and rebounding."

Playing basketball isn't all Loyd is up to these days, as she did some acting earlier this year.

On May, 1, the 20th anniversary of Spike Lee's classic sports movie, 'He Got Game," Bleacher Report released a trailer for the movie 'She Got Game,' where Loyd played Faith Mothershed showing what the iconic movie would look like with a female lead.

"It is nuts. If you think about everything that has happened this year and all the people I have encountered," Loyd said. "I am just trying to be a light for people and give them as much encouragement and motivation as they need and they want. I am just trying to give back as much as possible."

That was apparent on July 18 when the Storm played at the Sky in the annual homecoming game for Loyd.

All her fans from Niles West were on hand, including members of the coaching staff were on hand to watch her play and take some photos after – so many that arena security had to ask Loyd to leave the floor so they could clear the building.

"I play for the town I grew up in, so for them to come out here and support me means a lot," she said.

After this season, Loyd will again play overseas, as she will return to Turkey, where she played after her rookie season.

The international game is where the top female players make most of their annual salary, while also working on their game.

"It is more physical," she said of playing overseas. "But at the end of the day, it is still basketball and it lets you work on your game and come back here ready to go."

So, now that she has gone from Illinois High School All-State to WNBA All-Star, what is left for Loyd to accomplish.

"Being part of the Olympics is the No. 1 thing by far," she said as she eyes a roster spot for the 2020 in Tokyo. "I have to think – what can I do more of? Do I need to be in better shape, do I just need to keep doing what I'm doing," she said. "Whatever it is, the ultimate goal is to get that gold medal."