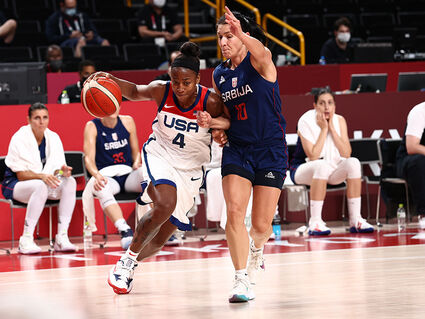 Niles West graduate Jewell Loyd was one of six first-year Olympian this year, winning a Gold medal in her initial games.

The biggest story of the game was guards Sue Bird and Diana Taurasi winning their fifth Gold – becoming the only player, men or women, to accomplish that feat.

And, while Bird and Taurasi are the storyline, there are six members of the US team in their first Olympic games – one of them being Niles West graduate Jewell Loyd.

The 27-year-old Loyd, who recently made her first WNBA All-Star game this season, played a back-up role to the legendary American backcourt in her first games.

In the Gold medal game, she tallied three points, connecting on the only shot she attempted in the contest.

"It means a lot. You know, I think the thing that is always on my head, is, you know, this is for my city in Lincolnwood, my family and friends," Loyd said after the Gold medal game. "Those are the people I called right away, the people who've been with me this whole time. So, it's a special feeling knowing that I could represent where I'm from and the people I grew up with.

"This is like the highest thing you can get as an athlete. And knowing that, you know, you put your body and mind through everything it can to be at a pinnacle like this, and, you know, it definitely gives confidence. It gives you appreciation for the grind. And I'm just really happy to be part of this."

When the games began, the United States was on a mission to claim the top prize.

"We came on a mission to finish with the gold and as professionals, we understand every game means something," Loyd said. "For me individually, I go into every game thinking of how I can impact the game as much as possible."

With Bird, 40, announcing this is her last Olympics and Taurasi, 39, possibly playing in her last games, reserve guards like Loyd could be looked at to carry the Americans into the 2024 games in Paris, France.

While in Toyoko, Loyd made sure she soaked in everything she could from two of the best.

"It is humbling, it is exciting and it is always a learning experience. When you step on the court with them, whether it is in practice or games, they definitely give you confidence, they give you experience and they give you wisdom and as young players trying to figure out our legacy in this league and what we bring to the table," Loyd said. "It has been awesome to listen to them and see what works and what doesn't work. I am not taking this experience for granted. This has been an amazing experience to play with both of them on the team together. Obviously, I get to (play) in Seattle with Sue, but we are playing with GOATs and this is pretty awesome."

Loyd and Bird share the same backcourt with the Seattle Storm of the WNBA, where they join forces with fellow Olympian Breanna Stewart. The trio helped the storm win the last two WNBA titles.

"I've been very fortunate to play with Sue (Bird) pretty much my whole career, so learning from her has been a privilege," Loyd said. "And then knowing that they are the best-of-the-best with her and Diana (Taurasi) here, Syl (Sylvia Fowles), their wisdom. That's stuff that you can't really challenge, because they have been here. They've done it. So, I'm just trying to learn as much as I can from them. 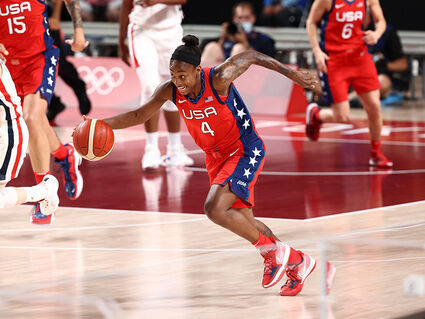 Jewell Loyd and the United States defeated Japan 90-75 in the Gold medal game of the Olympics in Toyoko.

"I've just been taking every moment in, embracing it. Obviously, it's not a typical Olympics, but I don't know what it was before. This is my first experience. So, I'm feeling good. It helps when you have great leadership, and also when you are here with your best friend, Stewie (Breanna Stewart), it makes it a lot easier. It makes you feel comfortable. The veterans have made it very easy for me just to fit in and do what I do."

Loyd averaged 4.8 points per game in the Olympics, with her tournament-high of 12 in the 86-69 win over Japan in the preliminary round.