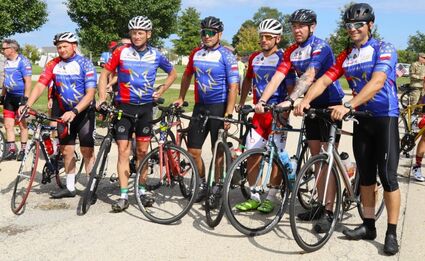 SPRINGFIELD, Ill. – For 17 years Polish and Illinois National Guard Soldiers fought together in Iraq and then Afghanistan. Last week they rode more than 500 miles together honoring warriors killed in post 9/11 conflicts.

The grueling 5-day, bicycle ride through Illinois, called the Gold Star 500, began six years ago when a group of active and retired Illinois National Guard members formed an organization called Gold Star Mission. The goal was to "Always Remember, Never Forget" the approximately 300 Illinois service members, including 34 Illinois National Guard members, killed overseas since the terrorist attacks of Sept. 11, 2001. The 500-mile bicycle ride was the organization's first and remains its main event to honor fallen service members and recognize their families.

The Polish learned of the organization and the Gold Star 500 through the Illinois National Guard's State Partnership Program with the Polish military. Sixteen Polish riders including seven Polish Army Soldiers, six Polish students and three Polish Gold Star Family members participated this year with an eye toward establishing a similar event in Poland. The ride started on Sept. 20 at the Illinois National Guard headquarters on Camp Lincoln in Springfield. About 520 miles later, it ended at the Great Lakes Community Center next to Naval Station Great Lakes in North Chicago on Sept. 24.

"It was an exciting and emotional event," said Polish Maj. Gen. Cezary Wisniewski, the Deputy Commander of the Polish Armed Forces. Maj. Gen. Rich Neely, the Adjutant General of Illinois and Commander of the Illinois National Guard, and Maj. Gen. Wisniewski greeted the Polish and American riders at the end of the Gold Star 500 after attending a State Partnership Program symposium at the Illinois Army National Guard's Marseilles Training Area on Sept. 23.

General Wisniewski said that since Illinois National Guard and Polish Soldiers fought side-by-side, it is fitting that they would share ideas on ways to honor our fallen. General Neely said that organizations like Gold Star Mission work hard to keep the memories of fallen warriors alive. "They focus on how they lived, not just how they died," he said.

The event also introduced U.S. military Gold Star Families to their Polish kindred. "We have established lifelong friendships and have met an entirely new military family," said Vonda Rodgers of Bloomington, the mother of Army Ranger Sgt. Joshua Rodgers, who was killed in action in Afghanistan on April 27, 2017. Rodgers said that the Gold Star Families have gotten to know the Polish Gold Star Families over the past week and "We are committed to growing together."

Lidia Kordasz, whose husband Polish Army Lt. Col. Grzegorz Kordasz was killed in 2016, learned of the Gold Star 500 and Gold Star Mission through Illinois Army National Guard veterans who had deployed with her husband to Afghanistan in 2012 as part of the Bilateral Embedded Support Team (BEST) A9. Their son, 14-year-old Michal Kordasz, rode the 500 miles to honor his father and other Polish and American fallen Soldiers. Lidia Kordasz said that the bonds of friendship between Gold Star Families transcend international borders.

While the language barriors made communication difficult at times, the Gold Star Families were able to connect at a deeper level, Rodgers said. "Hugs, laughs, smiles, tears – these need no language."

Illinois Air National Guard Senior Master Sgt. David Schreffler of the 183rd Wing rode in honor of Illinois Army National Guard Sgt. Joshua Harris, who was killed in Afghanistan on Sept. 17, 2008. He is also a member of the Sgt. Joshua Harris Veterans of Foreign Wars Post 2868 in Brookfield, near where Sgt. Harris grew up. He was greeted at the end of the Gold Star 500 with a hug from Harris' step-mother and Survivor Outreach Services Coordinator Jean Harris.

"It's special to me – honoring Josh and the friendships I've made with his family," Schreffler said. He recalled something Jean's late husband and Joshua's father, Bill Harris, said to him a few years back. "Bill said 'You can be bitter, or you can be better.' This is me getting better."

Illinois Army National Guard Lt. Col. David Helfrich, the co-founder and past president of Gold Star Mission, said the organization has been successful because there is a need for it. He said it was an honor to have the Polish participate this year. "We shared battlespace with the Polish and now we are sharing how we help keep the memories of our fallen alive." In addition to sponsoring events to recognize fallen service members, Gold Star Mission also presents scholarships in the names of those Illinois service members. 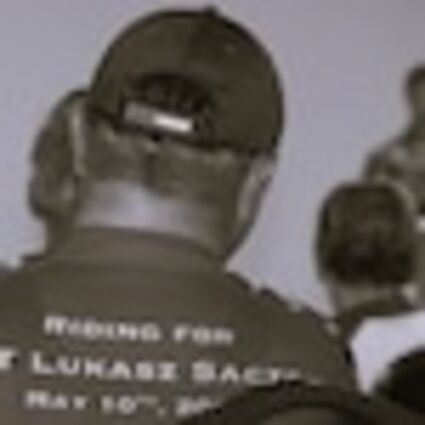 Rodgers said, no matter what nation they are from, Gold Star Families share a concern for the well being of service members and veterans. Gold Star Family members will get approached by veterans who feel guilty that they came home from war when their loved ones did not.

"We do not want you to feel guilty," Rodgers said. "What we do want is for you to love your people. Love them harder than you loved them before."