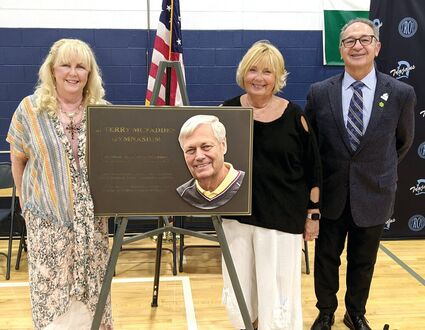 The Troy Community School District 30-C recently dedicated its Troy Middle School gymnasium to former school board member J. Terry McFadden for his long term service to the school district and for his love of youth sports.

McFadden's wife and family attended the ceremony, as did several members of the community and the school district.

"We, as a board, would like to express our appreciation and gratitude to J. Terry McFadden," School Board Vice-President Dr. Cynthia Rasmussen Grabavoy said at the dedication, "for his years of service and dedication to this board and the community. . . He did walk that path of service in an exemplary and special fashion. He granted us his gifts of clarity, discernment, persistence and speaking the truth.. . . Terry gave us his time, presence and wisdom, and in return, we were provided with his visions and dreams."

Grabavoy said whenever students walk through the doors of the gymnasium, they will be touched by the dreams of McFadden.

"Terry will always be in our hearts at Troy," she concluded.

McFadden served on the Troy School Board for more than 40 years and was elected for the first time when he was only 28 years old.

He was born in Joliet and attended Joliet East High School. He was a natural athlete and the star pitcher on the school baseball team. He graduated from Illinois State University with a BS in Education, earned his MS in Educational Administration from Northern Illinois University and continued with post-graduate studies throughout his teaching career.

While at Downers Grove, he was an assistant baseball coach and a peer mentor. He also taught rhetoric at Joliet Junior College for many years. He positively impacted thousands of students. 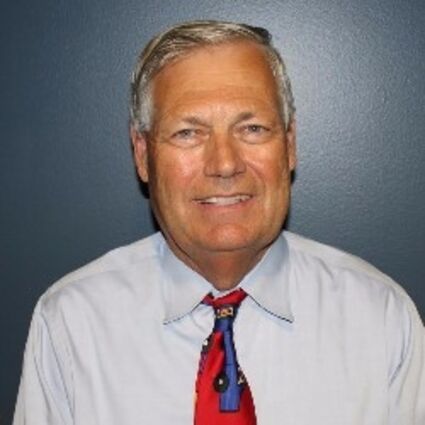 He was a big supporter of youth sports, including serving as a volunteer baseball coach in many local baseball leagues from pinto level to pony league.

He also coached his three sons and was an accomplished junior high, high school, and college basketball official.

He was also downstate official many times and twice officiated the IHSA State Finals. He was named Official of the Year.

A mock-up reveal of the plaque dedicating the space to McFadden was also unveiled at the event. The final plaque will be mounted at the entrance to the gym.