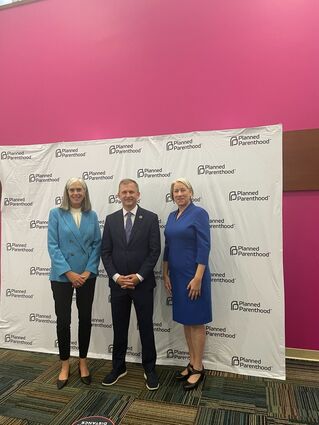 Aurora, IL (September 27th) - Today, U.S. Congressman Sean Casten (IL-06) was joined by Assistant Speaker of the House Katherine Clark (MA-05) at a press conference at the Planned Parenthood Health Center in Aurora discussing the House Republican's recent unveiling of their agenda for the 118th Congress that includes plans to federally criminalize abortion. Reps. Casten and Clark were joined by Jennifer Welch, President and CEO of Planned Parenthood of Illinois.

"This issue is not about states' rights, it's about women's rights", said Congressman Sean Casten. "When you make abortion illegal, abortion doesn't stop happening. This plan is an attempt to steal bodily autonomy from women and punish them for making their own choices about their personal health. I am grateful to be joined by such fierce advocates as Assistant Speaker Clark and Jennifer Welch. Reproductive rights are human rights and I will not stop fighting to protect them in Congress."

"You alone should decide when and if to have children, not politicians," said Assistant Speaker Clark. "I am so grateful that we have a champion in Congressman Casten. He understands what it means to vote to protect abortion access and he did so when Republicans across the aisle refused to do that. He voted to protect your right to cross state lines to receive health care, something that should be fundamental. Republicans are fighting every single day to eliminate freedom. Congressman Casten is fighting everyday, along with Planned Parenthood, to ensure we defend it."

"Planned Parenthood of Illinois is grateful for the support of Congressman Casten", said Jennifer Welch, "Abortion is legal in Illinois because we passed the Reproductive Health Act (RHA), which recognizes that providing abortion is health care, not criminal activity, and includes regulations that reflect current medical standards, not political ones. However, a federal ban would supersede the RHA meaning that PPIL would NOT be able to offer abortion care services. Together with our pro-choice champions like Congressman Casten, we won't stop fighting for the rights of our patients to make choices that are best for their life and their families, whether that is ending a pregnancy, making an adoption plan or choosing to parent.​" ​​