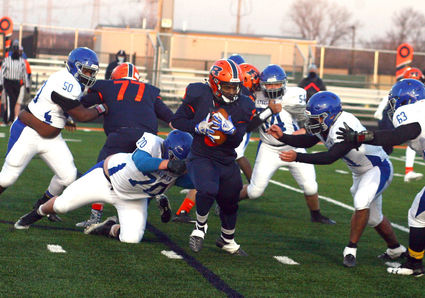 After serving as interim coach of Romeoville for all nine games last season when Oliver Gibson was away from the team and never returned, Justin Trovato is now the official head coach of the Spartans and the team is responding.

With a 37-9 win over Joliet Central, Romeoville sits at 2-1 halfway through the six-game shortened season.

Against the Steelmen (0-3), Romeoville got on the scoreboard first when Austin Diamantos hit Ramiro Esquivel-Urseti from 19-yards out for what would be the only scoring of the first stanza. After the PAT, the Spartans help the 7-0 lead with 6 minutes, 25 seconds left in the first quarter.

Diamantos did not return to the game after the break with an apparent injury to his non-throwing hand.

He was 3-of-5 for 33 yards, the one TD and an interception before his exit.

Junior Jahmari Christian got his big game started when he found the end zone with 8:17 left before half time to give Romeoville a 14-0 lead.

Central got on the scoreboard with a safety in the closing minutes of the first half when the snap on a put went astray, resulting in the safety and a 14-2 Spartan lead at the break.

"We haven't been playing hard the last couple of years," Christian said. "But we had to pick up the pace. I came up as a junior this year, my first year on varsity and had to be a leader, pick everyone up and bring intensity."

Calvin Glass got Romeoville on the scoreboard 15 seconds into the third quarter, when he broke free on a kick-off return TD to give Romeoville a 21-2 lead.

"It was a weird one," Trovato said. "We are playing on a Thursday night, on a short week, coming off a big win. It started a little slow and our kids were not there emotionally in the beginning, but we found a way to get it done. We had that big return from Calvin Glass to get us going and we finished it off."

With 3:01 left in the third quarter, Joliet Central took a safety when punting out of its own end zone to give Romeoville the 23-2 lead.

On the ensuing possession, Christian broke out a 23-yard scoring run, his second of the game for a 30-9 lead.

The Steelmen got a touchdown of their own with 7:08 left in the game when Carl Bew threw an 11-yard scoring pass to Brian Campbell Jr.

Christian then closed out the scoring with the hat trick, as he rumbled in from 19 yards out for his third score of the night.

"I don't focus on touchdowns and yards," the humble Christian said. "I just want to get my team up the field. There are 11 people out there - this is not like basketball, you can't have a one-man team. If you do your one-eleventh, it will come out with 100 percent. If I do my role, someone else will do their role and that is how brothers work. 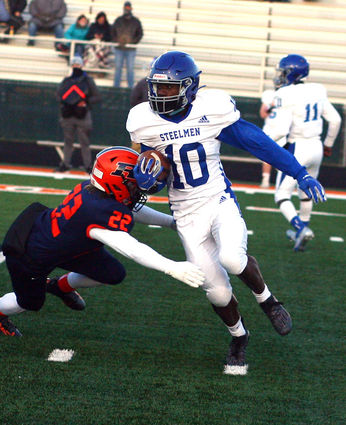 "This is all about heart - we are not the biggest team, the strongest team, or the fastest, but if you have heart - that is what wins games."

Christian finished the night with 112 yards on 11 carries and three touchdowns.

"Our running backs are a strength of the offense," Trovato said "With the option-style offense, we are able to get the ball in a lot of guys' hands. Jahmari has had two nice games back-to-back, but we can't forget Calvin Glass. If you get him the ball one time, he can potentially score, and we saw that on the kick off. He doesn't look fast when he is running, but he has that extra burst and can get it done."