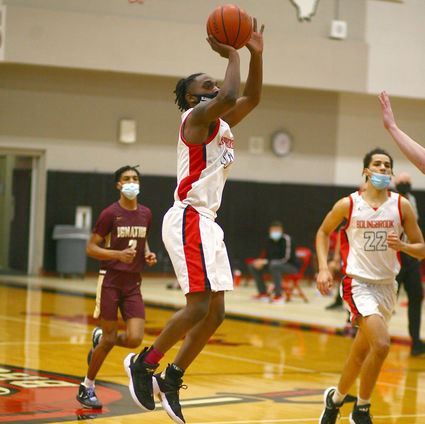 Senior Kyonte Thomas goes up for 2 of his game-high 23 points.

In a tribute to an injured senior, Bolingbrook and St. Ignatius orchestrated a scenario where the teams traded uncontested layups in the beginning of the game in order to get the injured 6-foot, 3-inch Kai Evans a basket in his final game as a Raider.

To the unknowing fan, it appeared as if Evans muffed his point blank attempt, but according to fellow senior Kyonte Thomas, it was all part of the plan.

"He said he was going to pad his stats a little and get two points and a rebound," Thomas said. "We love Kai and for him to go out like that made it special."

Thomas had a pretty special send off himself, as he recorded a team-best 23 points in Bolingbrook's 80-66 loss to St. Ignatius.

"There is nothing to be ashamed of there," Bolingbrook coach said. "They hit 13 threes in the game. They just beat Curie, so they are a very good team."

The final game of the season in no way illustrates what the Raiders did in a pandemic-shortened, six week season and with a roster that featured only four seniors, including Evans, five juniors, four sophomores and a freshman.

"Like everyone else, we had missed all that summer development and open gyms in the fall. We got a few contact days in October, but it wasn't the same, so the development of our younger kids was the utmost importance this year. If you would have told me at the beginning that this would happen with this group in six weeks, I would have signed up for that. And for Kyonte to be recognized as one of the best guards to ever play here was really important to me. He has been such a great leader for us and things would have been a lot different without Coronavirus."

For Thomas, it was nice to finish his season on the floor.

"This was rough," said Thomas, who will play next season at Trinity International University in Deerfield. "At the beginning of the season everyone was torn and then as a senior being able to go out there and play my last year meant everything to me. The whole six weeks we had was a great feeling." 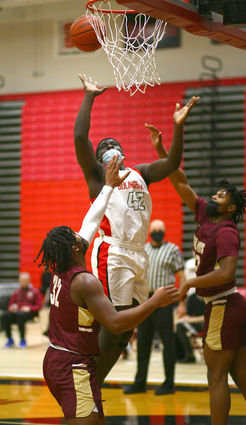 Junior Michael Osei-Bonsu will return next year to help a group of young, talented Raiders.

With such a young team alongside of him, Thomas' role was that of a leader on the floor - not only in terms of winning this season, but preparing players for the future.

"That was a key thing coach wanted me to work on, helping the young players like Josh Aniceto (freshman) and Mekhi Cooper (sophomore) and help them out for next year when they ramp up the schedule," Thomas said. "Hopefully they get where they need to be after their four years here as well. Playing here is amazing - the coaching staff and just everyone you see at the school is amazing. The experience at Bolingbrook was just amazing for me. When I was a sophomore, Joseph Yesufu, Darius (Burford), Tyler (Cochran) and those guys used to push me the same way I tried to push them."