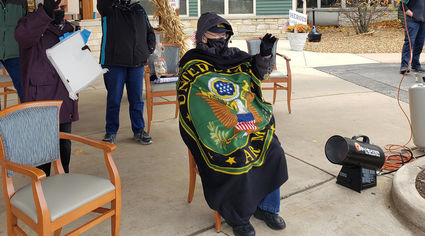 An astounding 16 million Americans served in World War II in the mid 1940s and of those, only roughly 325,000 are still alive.

Among those is Donald J. Breen, a proud veteran of WWII who turned 100 years old in August.

Celebrating Breen's legacy has been a challenge for family, friends and the staff at the Timbers of Shorewood where he resides.

Originally, a large party was planned, but was derailed when the COVID-19 pandemic locked down the country in March.

Then a birthday parade at the Timers was set for his birthday in August, but health issues postponed that.

Finally, on November 1, Breen was able to celebrate and given the honor he deserved.

As Breen sat bundled up under his United States Army blanket and donning his WWII Veteran hat, he sat and waved to a parade of well-wishers that was led by police and fire vehicles and followed by a seemingly never-ending row of cars with signs, balloons and kids popping through sun roofs to wish Breen a happy birthday.

"I never thought I would make it," Breen said about making it to 100-years-old. "It was really nice. Everyone was moving so fast, but we had to keep it moving."

"This was just amazing," said Breen's daughter Sue Fritz said. "I was standing out there crying. There were just so many people that showed up and it wasn't just family, it was friends and people that didn't really even know him, but knew (his family) showed up - so it was amazing. He has a very impressive military record and he is very, very proud of it. His (WWII Veteran) hat that I bought him, he almost never takes it off. His story is recorded in the archives in Washington (D.C) because they wanted to get as many of the World War II guys as they could."

Breen joined the Army on November 12, 1942 and served in the European Theater, fighting at the Battle of the Bulge and liberating the prisoners at Buchenwald.

In the span of nearly two months time in the end of 1944 and beginning of 1945, 89,500 American soldiers were killed, wounded, missing or captured in the Battle of the Bulge - the largest and bloodiest single battle fought by the United States in World War II and the third-deadliest campaign in American history.

At the time, Breen was a 24-year-old soldier serving under General George S. Patton with the 80th Infantry, Blue Ridge Division making less than $50 per month for fighting on the front lines.

"My brother went in before I did and he was making $21 a month," Breen said. "Then they raised it to $30 with an extra $10 for being on the front line because they had no volunteers."

Breen was discharged from the Army on January 3, 1946 with a rank of Buck Sergeant.

When he got out, Breen married his wife Jeanette, who died on November 18, 2019 after 68 years of marriage. The couple lived in the Joliet area. 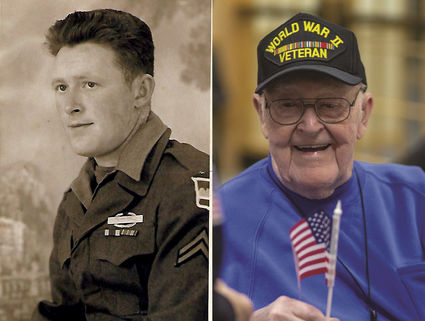 "As long as they are OK, that's all that matters," Breen said.

Breen has been a resident of the Timbers of Shorewood since 2017 and is known for making his own wine mixes around the residence.

Fritz said the Timbers planned everything for the birthday celebration including a vocalist and presentations by State Senator Jennifer Bertino-Tarrant and State Representative Mark Batnick.

"They did everything for us, all we had to do was show up," she said.