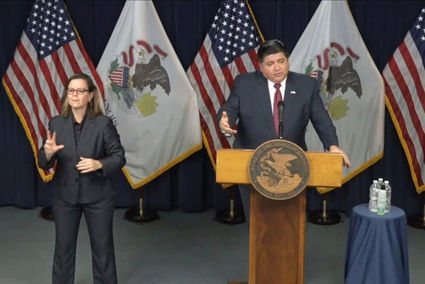 Gov. JB Pritzker answers questions from reporters during his daily news conference Thursday in Chicago regarding the state's response to the novel coronavirus pandemic.

Gov. JB Pritzker said Thursday, one month since he issued a state of emergency, it is "unlikely" his stay-at-home order can be lifted safely before April 30 and organizers of large summer events "need to think seriously" about canceling them.

The Illinois Department of Public Health reported an additional 1,344 confirmed cases of the novel coronavirus disease, COVID-19, bringing the state total to 16,422 in 81 of Illinois' 102 counties.

Dr. Ngozi Ezike, the department's director, said 66 residents died in the past 24 hours from Cook, DuPage, Effingham, Kane, Kankakee, Lake, Rock Island, St. Clair and Will counties. In total, the state has had 528 fatalities caused by coronavirus.

"From my perspective today, I do not see how we're going to have large gatherings of people again until we have a vaccine, which is months and months away," Pritzker said. "I would not risk having large groups of people getting together anywhere, and I think that's hard for everybody to hear, but it's just a fact."

The governor added an increase in testing residents, tracing social spread of COVID-19 and treating those who are ill are "not enough" for him to green-light large scale festivals, fairs and other events.

The number of cases and virus-related deaths in Illinois is still rising, Pritzker said.

Even if the public health situation in Illinois begins to improve by the month's end, state officials will consider other rules and restrictions to implement moving forward.

"It isn't going to be that all the sudden you're going to drop the stay-at-home and every other restriction," Pritzker said, "and that's because there is a propensity that if you do that, we're going to see a big spike upward and again, hospitalizations, ICU beds filled, vents filled and more death."

Since March 9, when the governor issued a disaster proclamation in response to the novel coronavirus pandemic, his administration limited gatherings to no more than 10 people, closed restaurants and bars to dine-in, enacted a stay-at-home order and shuttered schools.

"During the last month, we have experienced tremendous tragedy - we have lost hundreds of Illinoisans, each one a person of immeasurable worth to their families, their friends, and their communities and to this state," Pritzker said. "Thousands more are fighting in our hospital systems for their lives and many, many thousands more are recovering or have already recovered at home." 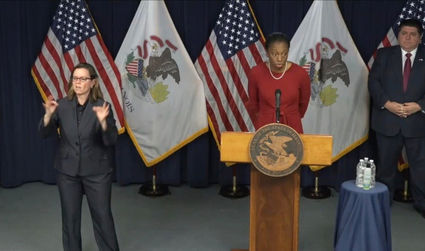 Illinois Department of Public Health Director Dr. Ngozi Ezike tells reporters that were 1,344 new confirmed cases of COVID-19 and 66 related deaths in the past day in the state. She spoke during a daily news conference Thursday in Chicago.

● The governor said implementing the next minimum wage increase in July - as dictated by statute the General Assembly approved last year - is still important. The minimum wage, which increased to $9.25 from $8.25 on Jan. 1 will increase again to $10 on July 1.

The scheduled raise is "very small," Pritzker said, and the economic situation created by the pandemic should "indicate to you more than ever before" why it should be done.

● Ezike said while some hospitals across the state might be reaching their patient capacity, there are other facilities nearby that can continue to receive ill Illinoisans. Her agency divided the 211 hospitals in the state into regions, and through monitoring, officials know how many beds and ventilators are free at which hospitals.