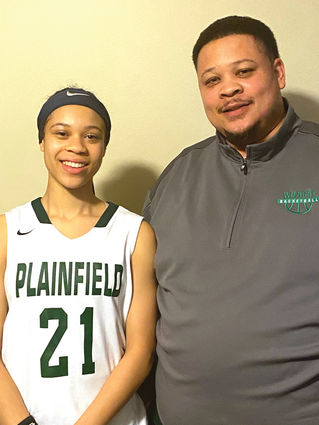 Aaliyah (left) and Armond Frazier have a rare chance to be on the court together.

January 27 was one of those days where he was.

That day, a California helicopter crash had killed nine people, three of them teenage girls basketball players and two coaches – most notably among the dead was former NBA superstar Kobe Bryant and his 13-year-old daughter Gianna.

The flight was on its way to Bryant's Mamba Academy, where the girls all played basketball for coach Bryant.

The news of the crash affected Frazier – not just because of his love of basketball or because of Bryant's status as one of the game's greatest players – but because like Bryant, Frazier is a coach of his daughter's team and he saw the same bond in Kobe and Gigi that he has with his daughter, Aaliyah

The Frazier's share the court at Plainfield Central, where Armond is in his third year as head coach and Aaliyah is a talented freshman who starts at guard for the Wildcats.

"Immediately it sent chills down my spine," Armond said of the helicopter crash. "I am in that same boat – I coach my daughter and we are very close. I was studying Kobe to see what he was doing so I could do the same things so I could keep the great relationship with my daughter. That really hurt me very much. Not only because I was following his career, but because I understand what they had and what they are missing out on and what their family is missing out on – his wife and other daughters, and what the world is missing out on because he was a great advocate for girls basketball and it was only going to get better from there.

"We had a long talk about it and I told her that is why we have to appreciate all the extra moments we have. I am not the extra sensitive guy and she knows that when I start talking that way, she listens."

Armond took over the program three seasons ago after Gregg Bayer from coaching the girls team to taking over the guys squad.

"It was very unexpected. We were coming to Plainfield Central based on where we live and I knew coach Bayer, I had been coming to the games," he said. "When the opportunity came and I applied and coach (Mark) Krusz (Central Athletic Director) hired me – we set a plan in place.

"We worked out a lot, trained a lot. I knew she would be good, but I didn't know how good she would be in ninth grade or if she would be ready to play on varsity. But, I told her if she was good enough, she would have to earn it. She is one of the hardest worker and she puts in the time and works her butt off. There is never anyone upset that she is playing – they want her in there."

When Aaliyah was good enough to make the varsity team her first year in high school, having a starting position was not the plan. "I never thought she would be starting, I thought maybe she would get some spot minutes and play some JV," Armond said. "Then (Annaliese Griffin) transfers and our other freshman tears her ACL and Kachae (Donald) was sick to start the season so she was out, so Aaliyah came in and was starting."

Being on varsity has helped Aaliyah with both basketball and her relationship with her dad.

"It is a great opportunity to learn and I get to spend more time with my dad. Other people don't have a relationship with their coach" she said. "I get to learn earlier and I am getting better because I am playing at a higher level. He pushes me to be the best that I can be."

Armond understands what it means to have these four years together.

"I am a single dad and being able to spend that time with her. Now that she is a teenager, most teenagers don't want to be around their dad, but she does," he said. "She wants to talk, she asks a thousand questions, we watch game film together and she is picking apart game film like a coach and she is trying to see the game through my eyes so she knows what I am thinking.

"It is always easy to get caught up in the coaching mode, but I always try and step back and have fun with it because this is our time to spend together I don't want to put too much pressure on her because like any kid, she wants to impress dad. She has put in a lot of work to get here and our future together is going to be great."