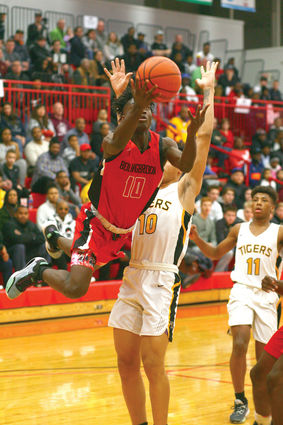 Up until a few years ago, a match-up between Bolingbrook and Joliet West basketball would have been a normal, conference game between two of the area's elite programs.

While not much in that statement has changed, the conference part has.

The two local schools that shared residency in both the SICA and SWSC, now call different leagues home after Joliet West relocated to the Southwest Prairie Conference a few years ago.

So, in order for them to compete on the same stage, it has to take place in non-conference action - which is what took place last weekend at Lewis University when Lockport Township hosted the four-team Will County Winter Classic at the Flyers' Neil Carey Arena.

"We love to play teams from our area and whether it is Lincoln-Way East at Thanksgiving, Bolingbrook in a nonconference, still playing Lockport - we miss the old conference, we would love to play H-F and Bolingbrook twice to test our mettle," said first-year Joliet West coach Jeremy Kreiger, who remembers the rivalry with the Raiders from his days on the Joliet Township co-op team.

The Tigers (20-4), who were missing several players for various reasons, stunned the crowd and took it to Bolingbrook (19-4) early opening a 12-point lead at the half.

Led by Elon-bound guard Darius Burford, Bolingbrook stormed back in the second half and won the game 74-67.

"We really challenged our guys at halftime. I was disappointed, not so much with the execution, but the effort in the second quarter," said Bolingbrook coach Rob Brost. "We weren't spreading the floor and doing the things we normally do on both ends. They just out toughed us in the first half.

"Most nights, we are the more athletic team and tonight where all that was equal, if not to their advantage in some of the matchups. We have played a really, really tough schedule, but we have not played a team as intense as Joliet West. You can prepare for it, but you are not really ready until you see it – the same with playing us. If they get up by 12 on any other team, they win by 20, but you can't prepare for what we do, the same way we can't prepare for what they do."

Burford led all scorers with 25 points on the night, while teammate Kai Matthew Evans added 23.

West was paced by 16 points from sophomore Schuyler Crudup, who was called up to fill voids left by the missing players.

Most notably absent was leading scorer and Toledo University recruit Jamere Hill, who missed his second straight game with an ankle injury.

"What I wanted then to focus on was not the excuses that could produce the shortcomings, but focus on the fact that we had guys that could play basketball and play healthy and confident. We did that, just at the end, we didn't have the horses for the final stretch," Kreiger said. "They are gaining the valuable experience in the adverse moments in the adverse environment. Super-Sectionals are played on a college floor. When March basketball comes around it is about who makes the least amount of mental mistakes and plays intelligent.

Now, they are ready to play in those moments.

"I am proud of the gentlemen in our locker room, staff included, and I am thankful that they believe in the culture that we are trying to build and the way that we are playing basketball. We learn more in our losses and I believe that if we are healthy in March that we proved we can play with anyone."

Even in defeat, West impressed the coach on the other side.

"It is always good for our area when Joliet West is good," Brost said. "And they are really good."