This season, the Oak Ridge boys will be touring on a new Christmas album 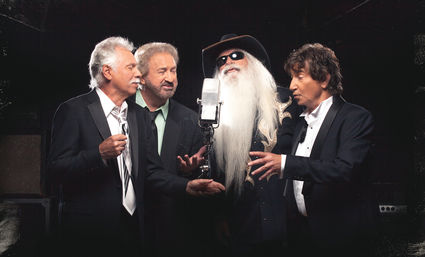 The Christmas tree was lit in downtown Joliet the day after Thanksgiving, the downtown shops are decorated and on December 22 another recent Joliet tradition will take place as the Oak Ridge Boys return to the Rialto Square Theater for their 30th annual Christmas concert.

"That theater is just a beautiful place, it has been fixed up nice and there is not a bad seat in the house. It is a great place to do a show," said Richard Sterban, bass singer for the Oak Ridge Boys. "Even more important than that, the people in the area are so special. We have a lot of friends and lot of fans in that northern Illinois area and they come out and treat us so well.

"We would not be what we are today without our fans and we enjoy to keep coming back and entertaining our fans."

Sterban joined the quartet in 1972 when a phone call from William Lee Golden lured Stuben away from a pretty special job he had at the time.

"For about two years, I was in a group called J. D. Sumner and the Stamps Quartet and about a year and a half of that time, I sang with the King of Rock and Roll. Back then, Elvis was the biggest star in the world and it was so special to be part of it. I have some very fond memories of my time with Elvis. As a young man in my 20s and I never thought I would ever be in the same Hall of Fame as Elvis. We are also in the Gospel Hall of Fame with Elvis as well.

"I was apparently on top of the world and I got a phone call from William Lee Golden in 1972 and asked me if I wanted to be the bass singer for the Oak Ridge Boys. While it was very exciting singing with Elvis, I was a big fan of the Oak Ridge Boys, I believed they had a great deal of potential and I made a decision to leave Elvis and join the Oak Ridge Boys. Back then a lot of people questioned me, but I really believed I was doing the right thing and I followed my heart and almost 48 years later, it turned out wonderful."

"We have had many honors come our way over the years and at the top of the list has to be getting inducted into the country music Hall of Fame a little over four years ago. What a special thing that was," Sterban said. "Elvis is in there, Johnny Cash is in there, George Jones, Dolly Parton, Kenny Rogers, the list goes on and on and on and for the Oak Ridge Boys to be in there and have our four faces there in bronze with Elvis, it is almost beyond words."

This season, the Oak Ridge boys will be touring on a new Christmas album, "Oak Ridge Boys Down Home Christmas," the eighth one they have released over three decades.

The album features their version of "Amazing Grace," the lone non-Christmas song, but a song very near and dear to the band after singing it one year ago at the funeral of George H.W. Bush, the 41st President of the United States.

"In 1983, we established a friendship with him that lasted almost 35 years and we sang for him several times while he was president and even after he was out of office. He always had to hear Amazing Grace and not to long before he died, he asked us if we would sing at his funeral and we promised him," Sterban said.We were on our Christmas tour and we were in Spokane, Washington. After we did our Christmas show there, we went to the airport, got on a private jet that was donated to us by a very dear friend who we will forever be indebted to. We flew all night to Houston. We got there in time to freshen up and get to the church where we met George W. Bush and Jeb Bush and we sang Amazing Grace for President Bush. We then got back on the private jet and flew back to Washington to do another Christmas show. We did not miss a show and we kept our promise to President Bush. He always taught us to do the right thing and it was the right thing to do.

“Because of that, we included Amazing Grace on our Christmas album even though it is not a Christmas song.”

The Christmas concert also is not all sounds of the season, as the Oak Ridge Boys make sure to treat fans to some of their best hits from their historic career.

“It is a whole new approach to Christmas, there will be songs from our new Christmas CD, but there will also be the traditional Christmas songs as well – it will be a nice balance,” Sterban said. “We open the show with 35 or 40 minutes of regular music – including Elvira - then after intermission, we do a Christmas set where we cover every aspect of Christmas, the fun side, the romantic side and we have a great Santa Claus and he goes out and interacts with the kids. The show is kid friendly, so we encourage parents to bring families. Then we do a rocking chair segment where we sit on Cracker Barrel style rocking chair and each guy takes turns talking about childhood Christmas music, what Christmas means to us and we intersperse the talking with singing Christmas songs. 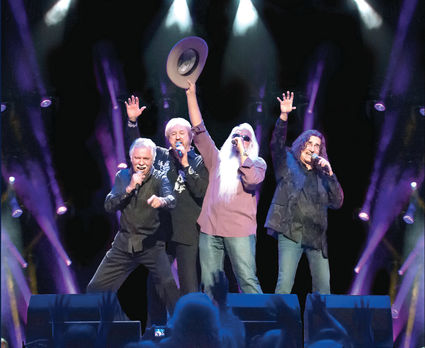 “After the rocking chair segment, we close with what we consider the most important part of the show and that is songs that deal with the real meaning of Christmas – the birth of Jesus and the importance of that in the world we live in today and a little bit of Jesus is not going to hurt anyone.”