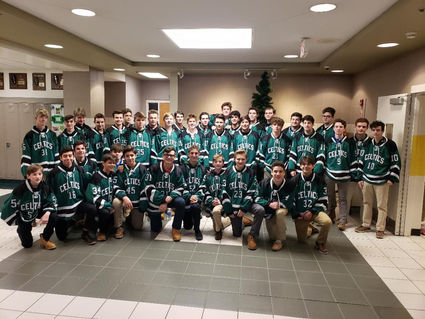 "This was something our team was passionate about," says Kevin Oliver, Theology Teacher and Varsity Assistant Coach. They wanted to donate the money to charity, so we selected Lurie Children's Hospital for a few reasons - one being the care that they gave to a student who passed away a few years ago, Charlie Dunne. Charlie did not play hockey but his brother was a member of our program."

The second reason was to offer more spirit wear for students and faculty/staff members to wear to games and on dress-down days in support of the hockey team.

"The response was overwhelming. We sold out of the jerseys on two different days in a matter of minutes and raised $1,000, which will be sent directly to the hospital," says Oliver. "We are working on having a toys-for-tots fundraiser at an upcoming game, which both our team and our opponent will take part in. This brings the kids from both teams together off the ice, and gives everyone a chance to give back during the holiday season."

Varsity player and Junior Joey McConnell says, "Kids are in need and we try and help as much as we can. We want to help out and share what we have with them."