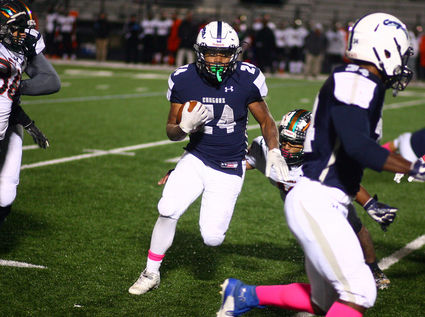 Keith Bronson had the best game of his career, carrying the ball 36 times for 207 yards and three touchdowns.

In a game that featured blown calls, changed calls and made-up calls, Plainfield South held off the officials and Plainfield East's late rally to grab a 33-20 win and control of its own destiny in the Southwest Prairie Conference East Division.

"I don't complain about crews and say anything, but they were a bad crew," "Both teams got it, it was just a rough flow to a game and that can affect us and we didn't let it."

After a scoreless first quarter, East scored first on a 19-yard interception return for a score by Sam Amponsah with 7 minutes, 58 seconds left in the second quarter.

That score held up until South scored with just less than a minute to play before the half on a Jaylin Eison run from 10 yards out to knot the score.

The run was the third score on the drive as late flags and ridiculous rule interpretations negated a pair of Cougar touchdowns.

South got the ball to start the second half of play and what no one braving the frigid fall weather knew was that when the ball was placed on the tee, it was an invitation to the Keith Bronson coming out party.

The 5-foot-7 junior, who's best performance coming into the game was 130 yards and a pair of scores in week 1 against West Aurora, rushed for all three of his touchdowns and a bulk of his 207 yards in the third quarter to give South a 27-7 advantage heading into the fourth quarter.

Bronson tallied scoring runs of 2, 10 and 4 yards in less than five minutes to break the game open.

"He is a great kid," said South coach Bill Bicker. "You can count on that kid for anything. The great thing is, he doesn't care if he gets the touches, whatever we need to do to win and you are going to win with kids like that."

Bronson said he used the loss to Minooka as motivation to get better every week.

"Each game, I keep going and grinding, working of foot work at home and getting in the weight room so when game comes, it is all about who is better," He said.

South ran the lead to 30-7 on a Benjamin Ortiz 39-yard field goal before East scored again.

Joey Morgan hit Jordan Knowles from 42 yards out for a score to cut the lead to 30-14.

A 33-yard Ortiz field goal and Morgan to Connor Bright scoring pass ended the scoring on the night. Morgan finished completing 17 of his 36 pass attempts for 194 yards and two scores. 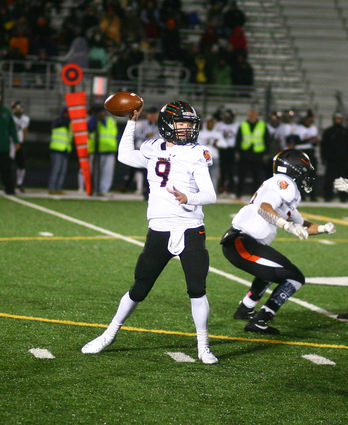 "Our adjustments seemed to help us in the end, but it took a little while to get in the flow," said East coach Brad Kunz. "We played an emotional game last week with Joliet West and that took a pounding on us and we didn't do as much all week because we wanted to stay healthy and when you get into a smash mouth game like this, that hurts you because you weren't used to it all week. We showed some life at the end, it was just a little too late."

Plainfield South (4-3, 3-0) faces Joliet West next week and a win will clinch the East division title and a playoff berth.

"We are young, we only have about 10 seniors and I knew with the schedule at the beginning of the season, it was going to be a struggle getting kids used to playing varsity football – but they are used to it now. Our juniors are not really juniors anymore and they are stepping up," Bicker said.

Plainfield East (3-4, 2-1) will travel to both Romeoville and Joliet Central and wins over both will make the Bengals playoff eligible.