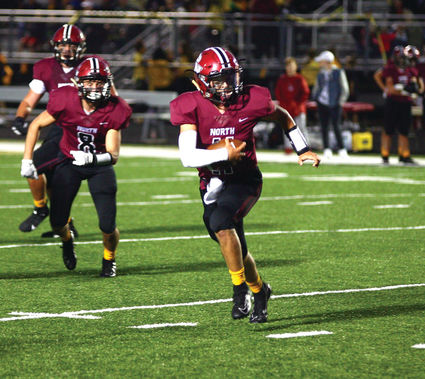 Entering Friday night's crucial Southwest Prairie West match-up, Minooka was ranked No. 7, in the Associated Press Class 8A state rankings, while Plainfield North, were looking to bounce back, from a heartbreaking, 14-13 SPC West loss No. 8- Oswego last week.

The Tigers received the opening kickoff, took almost half of the first quarter and faced a fourth and three at the Minooka 15-yard line.

In the words of the late Hall of Fame catcher Yogi Berra, for the Tigers, it was "de'ja' vu all over again."

Late in the first half of last week's loss at Oswego, Tiger running back Nate Simpson, fell short by one inch on a fourth and four play at the Oswego 46. After stopping the Tigers' on downs, Oswego marched 54 yards and scored the only touchdown of the first-half.

Against Minooka, Marcellus Moore (six carries, 47 yards; 3 catches, 37 yards), was stopped one inch shy of the crucial first down.

After the key stop on Moore at the 12, the Indians marched 88 yards on 13 plays and senior Noah Ellens (18 carries, 76 yards), scored the first touchdown of the night, crashing in from the two-yard line. A bad snap led to an Indian PAT failure, for a 6-0 lead.

Minooka junior quarterback Josh Davis' 30-yard run down to the Tiger 10 yard-line, replacing Lehr, for one play, was the highlight of the scoring drive.

Scoring drives of 81-yards on just five plays and 74-yards on eight plays, in the second quarter, gave the Indians a 20-0 lead at halftime.

Lehr hooked up with Etzkorn for a 34-yard reception, which highlighted the Indians 74-yard scoring drive, right before halftime. Etzkorn, on the eighth play of the drive, would rumble in from the five and junior place-kicker Mason Spivey's PAT, made it 20-0 Indians at the half.

"We really played well tonight," Etzkorn said. "Our offensive line was outstanding and the defense did their job."

Lehr's picture-perfect 27-yard scoring strike to Hudak made it 27-0 Indians with 9:26 left in the third quarter.

"Seth is the best," Hudak said. "His 27-yard touchdown pass to me was pure perfection."

"Trent is the best," Lehr said. "All I have to do is just get the ball near him and Trent will go get it. We played great tonight. My offensive line made the offensive go. Our defense was outstanding and our special teams were outstanding as well."

Ramirez picked up another interception and Indian DE Kellams had a big quarterback sack.

"We were really concerned about their outstanding speed and went out tonight, to not allow any explosive plays, "Minooka coach John Belskis said. "Zero explosive plays. We played great tonight, in all three-areas.

"I felt that our stop of Plainfield North on their first drive of the game, was key tonight. If they would have scored on that drive, it could have been a different game. Football is truly a game of inches."

For the Tigers, senior quarterback Adam Smith, completed seven of his 13 passes for 79 yards. Simpson would rush for 49 yards on 10 carries.