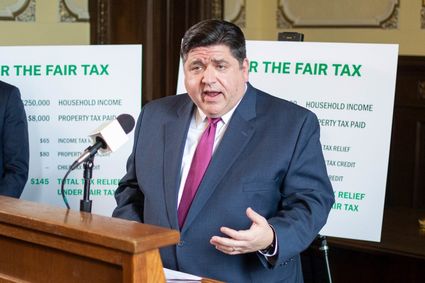 Gov. J.B. Pritzker and his wife, M.K. Pritzker, reported more than $6 million in gross income last year, about $5.5 million of which was federally taxable, according to a nine-page summary of 2018 state and federal tax returns released by his campaign Tuesday.

The governor's campaign did not, however, release any tax return documentation regarding trust funds which benefit the Pritzkers. The only information about the trusts was contained in a single sentence in the email which distributed the summary of personal tax returns.

"According to the information provided by the trustees, in 2018, trusts benefitting J.B. Pritzker paid an additional $5.3 million in Illinois taxes at a rate of 6.45 percent and $29 million in federal taxes," the campaign said in the email.

The tax return summaries also lacked supporting forms which would have offered more information on some of the total revenue and deduction streams.

The email from the Pritzker campaign touted the governor's signature tax overhaul proposal, claiming the Pritzkers and trusts benefitting the family would have paid an additional $2.8 million in state taxes under proposed graduated income tax rates.

The graduated income tax will be on the statewide ballot for the November 2020 elections. If the governor-backed proposal passes, an already-approved rate structure will take effect, raising the tax rate on those making more than $250,000 while keeping it the same or lowering it for those making less than that amount.

The Pritzkers would pay the top rate of 7.99 percent under the proposed graduated tax, meaning the family and their trusts would have paid $8.3 million in total state taxes, according to the email.

The Pritzkers' income appears to show about $2 million in taxable interest, $2.5 million in ordinary dividends, and $1.5 million in additional income, at least $1.3 million of which was listed in a line entitled "taxable refunds, credits, or offsets of state and local income taxes."

Gross income listed on the forms is about $6.2 million. A sum of $1.8 million is subtracted from state taxable income on the forms, but the details of that subtraction are included in a supplemental Schedule M form which was not released Tuesday.

That makes the 4.95 percent state tax rate applicable to about $4.3 million of their income, according to the documents. That means the Pritzkers paid $215,885 in state income tax on their personal income not including trusts, the documents show.

Also according to the email, the Pritzkers paid a 33.99 percent federal tax rate in 2018. That amounts to just over $2 million in federal taxes. The email also said the Pritzkers made $464,000 in personal charitable donations last year.

The preparer on the tax return is listed as Deloitte Tax LLP, a Columbus, Ohio, company.