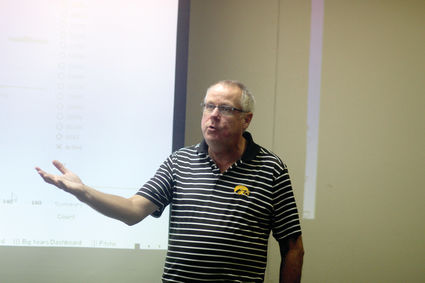 For Bill Leibforth, there is no taking a break during retirement.

A resident of Chicago his entire life, he fell in love with baseball at the age of eight and the game has always been a big priority in his life.

He authored the book "Baseball's Forgotten Black Heroes" and discussed it recently at the Lisle Library,

"I never really thought I was ever going to be an author even though that I love baseball," Leibforth said. "I've always just enjoyed gaining more knowledge about the sport, and when I gathered more information I thought to myself that I would write."

Leibforth's book is centered about how Jackie Robinson changed baseball forever, and the 17 players that followed in his footsteps.

Leibforth said that the difference from today's game to back when he was a kid has changed immensely, but the love he developed from an early age has kept his motivation to watch the game still alive.

Fifty-cent bleacher seats, players playing for the love of the game and getting autographs in the parking lot from players were all things Leibforth said he enjoyed as a kid.

Robinson, who became the first African American to play in the MLB in the modern era, broke the color line when he started at first base for the Brooklyn Dodgers on April 15, 1947.

"Jackie was an American hero," Leibforth said. "Some of the things he was called, how much scrutiny he had and to still be as great as he was is truly incredible."

What followed Robinson was a group of players Leibforth said that most avid baseball fans don't even know.

Educating the public and becoming more knowledgeable about the history of the game is something he said he wants his reader's to get from the book, while understanding the importance Robinson and the ones who followed had on American history.

"Willard Brown, John Kennedy and Bob Trice are just a few guys I really tried to highlight because of the large impact they all made," Leibforth said. "I mentioned some of the other guys in the book as well, but these few individuals had amazing stories."

Brown, played briefly in the major leagues in 1947, where he and Hank Thompson played against the Boston Red Sox which was the first time that two back players appeared in an MLB game together.

Kennedy, made his big league debut on April 22, 1957, becoming the first black player in the history of the Philadelphia Phillies organization.

Trice, made his big league debut on September 13, 1953, became the first black player in the history of the Philadelphia Athletics organization, now the Oakland Athletics.

"All of those guys just have a profound impact on baseball and American history," Leibforth said. "I just hope that this book can shed some light on a little more truth with all of these players, what they endured and how they changed baseball and America forever."