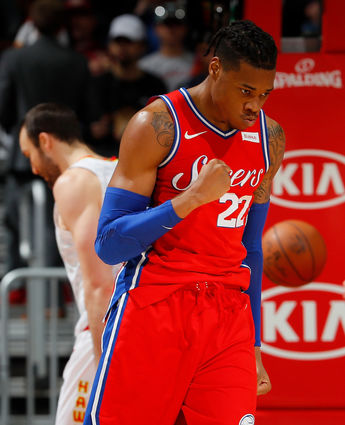 Lockport Township High School grad Richaun Holmes is one of very few area players to make it to the NBA.

The Joliet area has been one to produce a plethora of talented high school and major college basketball players.

That has not, however, resulted in sending players to the professional ranks in the National Basketball Association.

Sure, several have found success in the professional ranks overseas, but the NBA is the pinnacle of any player's career and few have broken through.

Three years ago – as a second round draft choice of the Philadelphia 76ers – Lockport High School graduate Richaun Holmes entered into that sacred fraternity.

Holmes started off on one of the worst teams in the NBA, but now the Sixers and the 24-year-old former Porter is placing his name among the Will County greats.

Holmes is only the seventh player born in the Joliet area to play in the NBA and only the sixth that attended a local school.

"I am tremendously blessed," Holmes said. "There are so many talented players to come from that area and God has been so good to me. When you put the work in and see where the game can take you and you never know. I just keep my head on straight and keep that tunnel vision."

Bulbs Ehlers, the first-ever draft pick of the Boston Celtics, was born in Joliet, but attended high school at South Bend Central in South Bend, Indiana.

With 156 games currently played in the NBA, Holmes is second only to Hall of Famer George Mikan as far as games played in the league for players in the Joliet area. When he was drafted, he joined Mikan, George Munroe (80 games), Roger Powell, Jr. (3 games) and fellow Lockport graduate Alando Tucker (51 games) as the only area players.

Bolingbrook's Ben Moore was called up from the G-League and saw action in a pair of games this year for the Indiana Pacers.

With a four games to one series win over the Miami Heat, Holmes became the first Joliet-area player to be part of a playoff-winning team since Mikan won the 1954 NBA title with the Minneapolis Lakers.

"This has been a pretty good run and we are just trying to do the best we can to extend it," Holmes said. "It has been an exciting time for the city and for us – especially the guys that went through that 10-win season. To see the fruits of your labor and to see all the hard work you put in turn around and put us in a position we are in now, it has been great. I can't really explain it."

The Sixers were not the talented team they are now when Holmes joined the squad in the 2015-16 season.

His rookie year, Philly earned only 10 wins, while increasing the total to 28 last season before posting a 55-27 record this year.

"For me, it was tough going through that time. I was trying to prove I belonged in the NBA and trying to secure a spot in the NBA while going through a 10-win season," Holmes. "It was more about trusting the work that we all put in. I had to go through the grind those first couple years, but this turnaround has been great.

"We all love each other on this team. We are a very close knit group and I think that has a lot to do with us being so close in age and going through the same experiences. We have really leaned on each other. We have very competitive practices and everyone is trying to prove themselves and we are all getting better and it is a great thing to be competitive."

While the team was going through rough spots, Holmes was able to get more floor time than he would have if selected by a winning team.

"Philly gave me the opportunity to show what I have and to get better in games and I had all the experiences you need as a young NBA player and going through those rough times, it gave me a chance to get better and to see what I had to do to stay in the league," he said.

Having to prove himself is nothing new to Holmes.

As a Porter, he played behind Landon Gamble and Ed Ward.

As a senior, the scholarship offers did not pour in from the schools he had hoped, forcing Holmes to attend Moraine Valley Community College for one year.

All that, he said, taught him lessons and made him better.

"Since I have been playing basketball, this has been my path and I am in a similar situation now where I have to continue to prove myself to get minutes on the floor," he said. "But, it is what I am built for and what I am made of and what I have been doing what I've done since I have been playing. My goal was to always make it to the NBA. I always wanted to give myself that motivation. Landon and Ed helped me out tremendously while I was at Lockport and just learning from those who are ahead of you and trying to get better was always my mindset.

Holmes and the 76ers take on Boston in the second round of the NBA playoffs, which opened Monday in Boston.